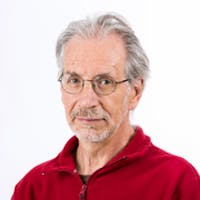 Gilles Horowitz was born in Paris in 1949. He received a MS in physics in 1973 and a PhD in semiconductor physics in 1975 at the University Paris 7 (now Paris-Diderot). One year later, he was hired as a research fellow by the French National Center for Scientific Research (CNRS). Between 1976 and 1981, he worked at the French Atomic Energy Agency (CEA) at Saclay, on a program on the photo-electrochemical conversion and storage of solar energy. In 1982, he joined the Molecular Materials Lab (LMM) at Thiais, and in 1988 he launched a research program that led one year later to the realization of one of the first organic field-effect transistor (OFET). In 2000, he was appointed by the University Paris-Diderot, where he was full professor between 2005 and 2008. Finally, in 2010 he joined the group of Physics of Interfaces and Thin Films (PICM) at Ecole Polytechnique, Palaiseau. His current interests focus on the physical modeling of various organic electronic devices, including organic field-effect transistors, organic solar cells and organic electrochemical transistors (OECT).He is author or co-authors of more than 200 publications and communications in peer-reviewed journals and conference proceedings, and 4 patents. Gilles Horowitz has been retired since July 2014 and is currently emeritus CNRS research fellow.