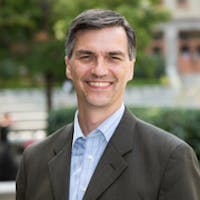 Director of Education and Senior Scholar

Dr. Pawelski is the founding director of Penn’s Master of Applied Positive Psychology (MAPP) program and an adjunct associate professor of religious studies in the School of Arts and Sciences. He teaches courses on positive interventions and the humanities and human flourishing and is the author of The Dynamic Individualism of William James and articles on the history of philosophy and its application to human development. Dr. Pawelski holds a grant from the Templeton Religion Trust to further his studies into “The Humanities and the Science of Well-Being: Toward a Strategic Collaboration for Understanding, Measuring, and Cultivating Human Flourishing.” He has served as editor of the philosophy section of the Oxford Handbook of Happiness, co-editor of The Eudaimonic Turn: Well-Being in Literary Studies, and co-editor of On Human Flourishing: An Anthology of Poems. An international keynote speaker who regularly makes presentations in Spanish as well as English, he has given talks in more than 20 countries on six continents. He holds a number of key leadership positions, including founding Executive Director of the International Positive Psychology Association (IPPA), President of the William James Society, and Member of the Steering Committee of the International Positive Education Network (IPEN). Dr. Pawelski is the recipient of a Practice Excellence Award from the Ministry of Education of the People’s Republic of China, as well as the Humanitarian Innovation Award for the Humanities, Arts, and Culture from the Humanities Innovation Forum at the United Nations. He has been featured in major U.S. and international media, including the New York Times, U.S. News and World Report, the Philadelphia Inquirer, the Chronicle of Higher Education, El Norte (Mexico), and Perfil (Argentina), and he has appeared on various television networks such as NBC (The Today Show), Globo, Univisión, and Toronto Public Television. https://ppc.sas.upenn.edu/people/james-pawelski