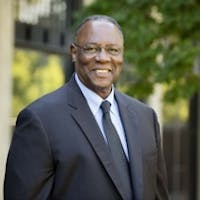 James D. Anderson is the Edward William and Jane Marr Gutsgell Professor and Interim Dean of the College of Education at the University of Illinois at Urbana. He holds affiliate professorships in History, African American Studies and Law. His book, The Education of Blacks in the South, 1860-1935, won the American Educational Research Association outstanding book award in 1990. He served as senior editor of the History of Education Quarterly from 2006 to 2016. Anderson has served as an expert witness in a series of federal desegregation and affirmative action cases, including Jenkins v. Missouri, Knight v. Alabama, Ayers v. Mississippi, Gratz v. Bollinger, and Grutter v. Bollinger. He served as an adviser for and participant in the PBS documentaries School: The Story of American Public Education (2001), The Rise and Fall of Jim Crow (2002), Forgotten Genius: The Percy Julian Story (2007) and also in the newly released Tell Them We Are Rising: The Story of Black College and Universities (2017). He was elected to the National Academy of Education in 2008. In 2012, he was selected as a Fellow for Outstanding Research by the American Educational Research Association and received the Lifetime Achievement Award from the American Association of Colleges for Teacher Education. In 2013, he was selected Center for Advanced Study Professor of Education at the University of Illinois in Urbana. In 2016, he received the Palmer O. Johnson Memorial Award for the Outstanding Article in American Educational Research Association journals.

Race and Cultural Diversity in American Life and History