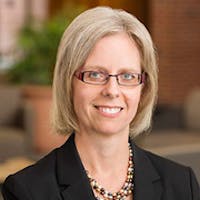 Professor Jennifer Robbennolt is an expert in the areas of psychology and law, torts, and dispute resolution. Her research integrates psychology into the study of law and legal institutions, focusing primarily on legal decision-making and the use of empirical research methodology in law. Professor Robbennolt is co-author of several books, including The Psychology of Tort Law; Psychology for Lawyers: Understanding the Human Factors in Negotiation, Litigation, and Decision Making; a textbook on Empirical Methods in Law (with Illinois colleagues Robert M. Lawless and Thomas S. Ulen); and the influential casebook, Dispute Resolution and Lawyers. She has served as served as secretary of the American Psychology-Law Society and as the chair of the AALS section on law and the social sciences and is on the editorial boards of Psychology, Public Policy, and Law; Law and Human Behavior; and Law and Social Inquiry. Professor Robbennolt has twice been awarded the Wayne R. LaFave Award for Excellence in Faculty Scholarship and the Shook, Hardy, & Bacon Excellence in Research Award, and has received the Professional Article Prize awarded by the CPR International Institute for Conflict Prevention & Resolution. She has been awarded the John E. Cribbet Excellence in Teaching Award, the Blackwell Sanders Peper Martin Distinguished Faculty Achievement Award for outstanding teaching, and the Gold Chalk Award for dedication and service to the advancement of graduate student education. A graduate with highest honors of the University of Nebraska College of Law, Professor Robbennolt also earned master's and doctoral degrees in social psychology from the University of Nebraska. In 2016 she was presented with the inaugural Distinguished Alumni Award from the University of Nebraska Law-Psychology Program. Before joining the faculty at the University of Illinois, Professor Robbennolt was associate dean for faculty research and development, associate professor, and senior fellow in the Center for the Study of Dispute Resolution at the University of Missouri-Columbia School of Public and International Affairs and at Princeton University's Department of Psychology and as a law clerk to the Honorable John M. Gerrard of the Nebraska Supreme Court.