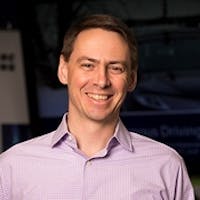 Prof. Steven Waslander is a leading authority on autonomous aerial and ground vehicles, including multirotor drones and autonomous driving, Simultaneous Localization and Mapping (SLAM) and multi-vehicle systems. He received his B.Sc.E.in 1998 from Queen’s University, his M.S. in 2002 and his Ph.D. in 2007, both from Stanford University in Aeronautics and Astronautics, where as a graduate student he created the Stanford Testbed of Autonomous Rotorcraft for Multi-Agent Control (STARMAC), the world’s most capable outdoor multi-vehicle quadrotor platform at the time. He was recruited to Waterloo from Stanford in 2008, where he founded and directs the Waterloo Autonomous Vehicle Laboratory (WAVELab), extending the state of the art in autonomous drones and autonomous driving through advances in localization and mapping, object detection and tracking, integrated planning and control methods and multi-robot coordination. In 2018, he joined the University of Toronto Institute for Aerospace Studies (UTIAS), and founded the Toronto Robotics and Artificial Intelligence Laboratory (TRAILab). Prof. Waslander’s innovations in drone research were recognized by the Ontario Centres of Excellence Mind to Market award for the best Industry/Academia collaboration (2012, with Aeryon Labs), best paper and best poster awards at the Computer and Robot Vision Conference (2018), and through two Outstanding Performance Awards, and two Distinguished Performance Awards while at the University of Waterloo. His work on autonomous vehicles has resulted in the Autonomoose, the first autonomous vehicle created at a Canadian University to drive over 100 km on public roads. His insights into autonomous driving have been featured in the Globe and Mail, Toronto Star, National Post, the Rick Mercer Report, and on national CBC Radio. He is Associate Editor of the IEEE Transactions on Aerospace and Electronic Systems, has served as the General Chair for the International Autonomous Robot Racing Competition (IARRC 2012-15), as the program chair for the 13th and 14th Conference on Computer and Robot Vision (CRV 2016-17), and as the Competitions Chair for the International Conference on Intelligent Robots and Systems (IROS 2017).